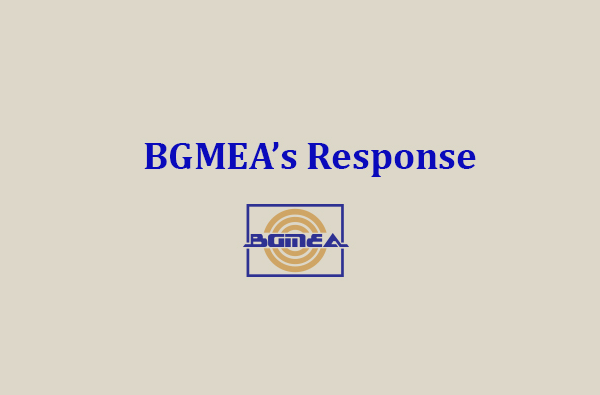 The editorial published by The Daily Star with the headline “Financial hardship of RMG workers” mentioned that the RMG workers’ appears to be an inaccurate interpretation of the original study report by SANEM / MFO which is seriously misleading. Though the editorial picks a few selective issues from the mentioned report, BGMEA wishes to issue the following clarification on the complete report by SANEM and MFO –

Even though export plummeted to a record low during March-June 2020 due to Covid-19, there was no wage erosion in the industry which was established by the study conducted by SANEM and MFO itself. The report mentions that “July and August salary payments are impacted by Eid al-Adha, with advance.” This is logical since a good number of factories paid the salary of July in the last week of July (instead of first week of August), since the Eid-al-Azha was on 1 August. The enumerators accounted the salary of July as the salary of June, so the June salary paid in July is seen abnormally high, whereas salary for July paid in August is seen very low (since most of the salaries were already paid in previous month in advance). The report also shows the wages paid in May abnormally low, and the reason behind it is the salary of April was paid in May, and we know that factories were closed in April and government’s directive was to pay 65% of the wages. In contrast to the headline of the editorial, the report shows that “In 2019 the typical monthly payment was Tk. 10,000”, and during the time of pandemic workers received more than 10,000 taka each month on average (except May), so this is evident by the report itself that there was no wage erosion so far.

Regarding job security, we found the data presented in the report in terms of line graph is flawed since it aggregates the responses of workers against issues such as factory closure, leave without pay, suspension, underemployment and lay-off. Since not all workers faced all these issues individually and at the same magnitude, so drawing an average value of the responses on these different issues is not correct.

And we think when a question is asked ‘How secure is factory work in the RMG over the next few months?’, it should also bring in contrast the immediate outlook of the global fashion sourcing and retailing. As far as job security is concerned, a factory can only keep open if it has work and pay wages to its workers, and a factory will have work if there is demand in the retail market. So the scenario of second wave, retail market, global trade, etc. should have been brought in contrast, rather than leaving the question to the factories which is only a part of the global supply chain.

Regarding “Wage Digitization”, the report says ‘Will digitization be maintained?’ Though wage digitization is not linked to job security in any way, this is only a means to pay wages to the workers which is proved effective through the intervention of government. The wages disbursed digitally during May-July through MFS was absolutely an extraordinary arrangement, whereby banks directly paid the wages to the workers as per the instruction of the government. The usual wage payment through MFS is only 5%, so this has to be scaled up. BGMEA is working with ICT division on this. Since wage digitization was practiced across the RMG industry during April-June 2020, we will be able to follow the same procedure flawlessly if it is needed further.

Regarding “Digital financial skills”, the report asks “How can they be made more useful?” It is true that the use of MFS was new for many of the workers, but we rarely noticed any issues / problems by the workers while almost all the workers received wages through digital platform during April-July 2020. While millions of workers started using the digital payment without any major reporting of problems, and while we cannot expect them to be ‘pro users’ of such apps, it’s a positive sign that they are learning to use it. Factories in collaboration with BGMEA and supporting organizations may initiate programs to train workers / train the trainers to build their capacity to better use the MFS functions. Furthermore, a few value added and complementary services can be added in it like healthcare facility, subsidization, health insurance, etc. The MFS can be used by the factories to open credit line in favor of the workers who can access these credits especially in situation like COVID, if the factories are financially able to extend credit facility. The MFS users can also be encouraged and privileged in other services like taking small loans from banks, etc.

Regarding “Employment and Food Security”, the term ‘Food security’ was not defined or explained in the study report. While the report also mentions “Even though factories were closed for most of April, workers were still paid for work performed in March”, it self contradicts with statements like in April the unemployment was 49% which pushed food security to 3%! Does it mean that 51% of the workers lost job in April? This cannot be true since the factories were declared closed during that time of pandemic and all the workers received wages for April through digital platform. So as long as the workers received their usual wages, how can the degraded food security scenario as drawn in the report be justified. We think these surveys should have more clarity on methodology and reporting. The definition of the terms used must be established. It should not be generalization based on random responses from workers. In fact we don’t see any relevance to bring this issue of food security since there is no crisis for staple food supply in the market, there is not unusual inflation, there is no mass job cut in the industry, and there is no wage erosion.

Regarding “Employment and Illness”, the SANEM / MFO’s report mentions that “Between May and September workers went back to work and employment levels remain high. At the same time illness in the household reported by the worker has been climbing.” Again the term ‘illness’ was not defined in terms of nature of illness, how serious are they, are they related to job related illness or result of mass gathering, etc. And there is no year over year comparison available to compare with previous year. If illnesses cannot be related to employment, it is difficult to comment on how to manage the trade-offs between employment and illness.

Regarding the issue “What can be done to address the cost of food bought on credit?”, we are not able to respond to this question since this is not a problem faced by the RMG workers only, and the industry does not have any control over the market of food and groceries. This completely depends on the market forces. However inclusion of the RMG workers in the social safety net program may help to protect the wages of workers from sudden inflation.

With the visionary direction by the Honorable Prime Minister and supports from Her Government, RMG industry and its workers were able to pull off the direst moments early this year. With the indication of second wave, the continuation of these supports will be critical for the workers and the industry as mentioned in the editorial.