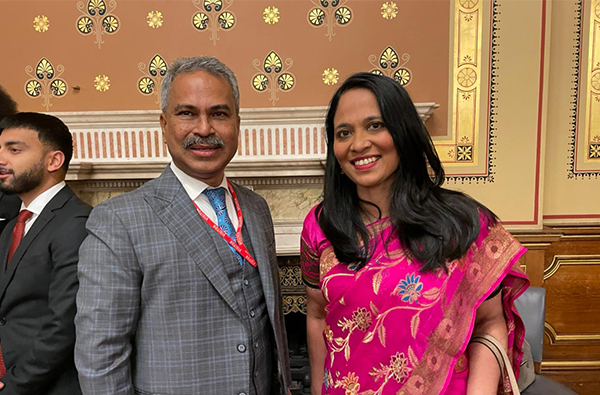 BGMEA President Faruque Hassan met with Rushanara Ali MP and Rupa Huq MP, members of the Parliament of the United Kingdom, in London on November 13.

They had discussion on various issues including cooperation between the UK and Bangladesh regarding graduation from LDC, possible changes in the tariff regime and how Bangladesh could retain its access to the UK market in the post-LDC era.

He requested Rushanara Ali MP and Rupa Huq MP to extend their support with regard to the continuation of duty-benefit for Bangladesh after the graduation from LDC status.

British politicians of Bangladeshi origins were also present at the meeting.

During the meeting Faruque Hassan stressed the need for engagement of non-resident Bangladeshis (NRBs) in the development of Bangladesh.

He said NRBs have the immense potential to make more contributions to accelerating Bangladesh’s development with their skills, technical expertise, knowledge and investment.

A good number of NRBs living in the UK are well-established businessmen, while many have influential positions in governments as politicians and members of parliaments. Besides, many Bangladeshis are academicians, researchers, high government officials and holding other prestigious positions.

They can play a significant role in shaping the financial, social and economic conditions of the country, the BGMEA President said.

He sought cooperation of the two British MPs in encouraging Bangladeshis living in the UK to invest in different potential sectors of Bangladesh including high value-added and non-cotton textiles along with others.

He also apprised the British MPs about the unprecedented strides made by Bangladesh's RMG industry over the years in safety, sustainability and social compliance, which have earned the sector global recognitions.