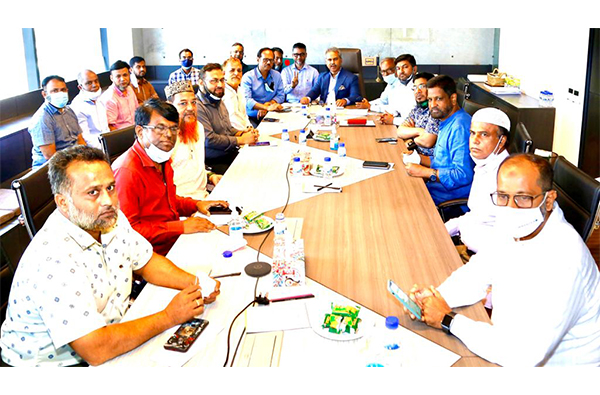 In the meeting they stressed the need for increased vigilance of law enforcement agencies including Highway Police, Rapid Action Battalion and District Police on the Dhaka-Chattagram highway and also on Mirpur-Dhowr road to prevent the theft of RMG export goods.

The BGMEA leaders requested the Bangladesh Truck Covered Van Owners Association to ensure that GPS tracker is installed in all goods-laden cargo vans as a measure to stop stealing during transportation. They called on the association leaders to fix the fare of trucks and covered vans and refrain from hiking transport fare arbitrarily.

They urged all garment factories to keep the photos of drivers, helpers and travel documents including licenses of trucks and covered vans as a precautionary measure.

They requested the Roads and Highway Department to carry out repair works on the Langabandh Bridge in Sonargaon on the Dhaka-Chittagong Highway during the upcoming Eid holidays instead of the present schedule on 12-14 July as it would require all goods-laden cargo vans to travel around 100 kilometers extra on an alternative route. It would delay transportation of RMG cargoes and increase the risk of missing timely shipment.