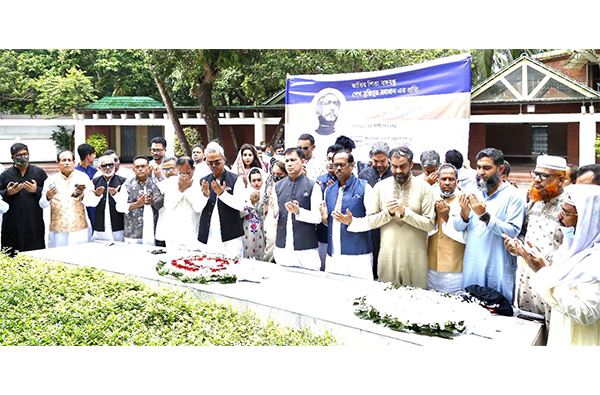 The BGMEA Board led by President Faruque Hassan paid tributes to Father of the Nation Bangabandhu Sheikh Mujibur Rahman at Tungipara in Gopalganj on October 22.

They paid homage to Bangabandhu by placing a wreath at his shrine there. They stood in solemn silence for some time as a mark of profound respect to the memory of Bangabandhu, the architect of Bangladesh’s independence.

They also offered special munajat, seeking eternal peace of Bangabandhu and other martyrs of the August 15 carnage.

BGMEA President Faruque Hassan said the ready-made garment industry has played a significant role in the socio-economic transformation of Bangladesh and would continue its contribution to building “Sonar Bangla” as dreamt by Bangabandhu Sheikh Mujibur Rahman.

He said, “Bangabandhu is not only the architect of the independent Bangladesh, he also envisioned building a prosperous country with economic emancipation and social justice for its people. The dream of Bangabandhu is now becoming a reality under the prudent and visionary leadership of Honorable Prime Minister of Bangladesh Sheikh Hasina. Bangladesh has already qualified to graduate from LDC to a developing country.”

The apparel industry would continue to play its role in accelerating the economic growth of Bangladesh and realizing the Vision 2041, he added.

BGMEA President Faruque Hassan signed the visitor’s book at the mausoleum complex and planted a tree on its premises.