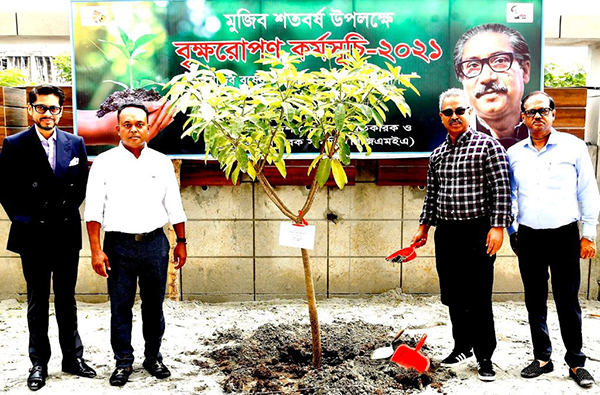 Bangladesh is one of the most climate-vulnerable countries in the world despite being one of the lowest carbon emitters. Devastating impacts of global warming seems imminent if carbon emissions go unabated. What is more worrying is that climate change impacts know no geographic boundaries and pose serious risks to the planet and its people. Countries like Bangladesh may fall victim to the wrath of natural calamities no matter how little it emits. Hence, real actions are required to save planet and people from the devastating impacts of global warming.

The RMG industry is not only contributing to powering the country’s economy but also acting responsibly to ensure that it grows in a sustainable manner. Bangladesh Garment Manufacturers and Exporters Association (BGMEA), as the pivotal body governing the apparel industry, is leading the way to reduce the environmental impacts of production in the apparel sector.

BGMEA has been honoured with the 2021 USGBC Leadership Award for its exemplary leadership in developing Bangladesh as the home of the highest number of green garment factories in the world. BGMEA has joined the Fashion Industry Charter for Climate Action, an initiative convened by the UN Climate Change. The Charter goes beyond previous industry-wide commitments. It includes a target of 30 per cent GHG emission reductions by 2030.

As part of its continuous strive for sustainability BGMEA has launched a tree plantation campaign to pay homage to the memory of the Bangabandhu Sheikh Mujibur Rahman, who dreamt of a prosperous and green Bangladesh and initiated tree plantation campaigns in the country soon after the independence as he realized the importance of trees to protect environment long before the issue of climate change had surfaced.

BGMEA has begun the campaign in the month of August to pay tribute to the Bangabandhu Sheikh Mujibur Rahman and to those who were martyred on August 15, 1975. President Faqurue Hassan inaugurated the campaign by planting trees on the premises of Sparrow Apparels in Gazipur on August 15 where he along with the leaders of BGMEA paid homage to the architect of our independence by placing wreaths at the portrait of Bangabandhu. Later on, the BGMEA President planted trees in different garment factories in Chattogram, Gazipur and Narayanganj with the aim to inspire people from all walks of life to fill Bangladesh with greenery. The month-long campaign concluded by planting trees at the newly constructed BGMEA headquarters at Uttara in Dhaka. The BGMEA headquarters is and will remain as a body to facilitate and accelerate green growth in the apparel industry of Bangladesh. We express our gratitude towards Honorable Prime Minister Sheikh Hasina for her support in allocating land to BGMEA to construct the new building. BGMEA has taken the initiative of making the BGMEA headquarters located at Uttara, Dhaka as a green building and hopes to achieve LEED (Leadership in Energy and Environmental Design) certification from US Green Building Council (USGBC). The new BGMEA building will be equipped with energy saving lights, rainwater harvesting, solar PV, energy efficient water-based chiller system, and sewage treatment plant (STP). To ensure daylight consumption the building will also have double-glazed glass. The plumbing of the building will be equipped with LEED compliant water-efficient fixtures. It will use FSC certified furniture, VOC-free paint etc.

We are expecting the newly build green BGMEA headquarters will be fully functional in December 2021, when the whole country will celebrate 50 years of independence. BGMEA is happy to have its headquarters at Uttara as the starting station of the long-cherished and first-ever metro rail of Dhaka is also located at Uttara.

Bangabandhu’s dream was to transform the independent Bangladesh into “Sonar Bangla”. But the conspirators killed him to shatter his dream forever but in vain. The killers were able to murder Bangabandhu but not his dreams and ideals. Grief of loss has been turned into strength which is the driving force behind Bangladesh’s journey towards development. The “Sonar Bangla” as dreamt by Bangabandhu is now coming true under the prudent and visionary leadership of his daughter Honorable Prime Minister of Bangladesh Sheikh Hasina. Bangladesh has emerged as a role model of development in the world and qualified to graduate into a developing nation from a Least Developed Country (LDC).

The garment industry has been making crucial contribution to the socio-economic transformation of Bangladesh for around four decades. The industry will continue to contribute to building “Sonar Bangla” as dreamt by Bangabandhu Sheikh Mujibur Rahman. Bangladesh will continue its march forward with indomitable spirit under the dynamic and prudent leadership of Honorable Prime Minister Sheikh Hasina.