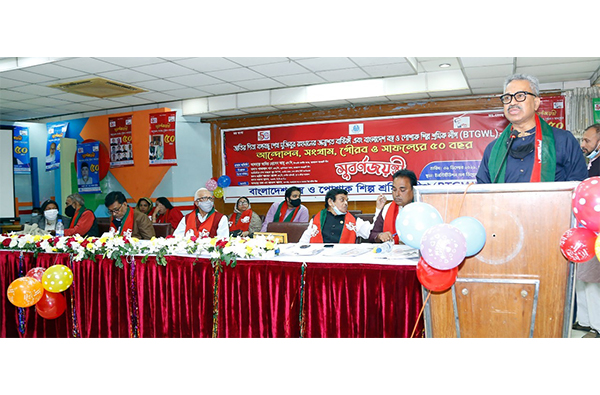 The prestigious position attainted by the ready-made garment industry of Bangladesh is built upon the years of hard works and dedication of both workers and entrepreneurs.

The industry has immense contribution to rebuilding the war-ravaged country which is now a ‘development surprise’ to many in the world due to its impressive performance in socio-economic development over the last 50 years.

The observations were made by BGMEA President Faruque Hassan while delivering his speech as guest of honor at a program organized by Bangladesh Textile & Garment Workers League (BTGWL) in Dhaka on December 31, marking 50 years of BTGWL.

In his address Faruque Hassan said the RMG industry of Bangladesh has made significant progress in the areas of safety and sustainability, especially workers’ well-being and industrial relations.

He further said starting from the elimination of child Labour in mid-nineties, and the emerging compliances issues including timely payment of wages, ensuring the minimum wage, overtime, hygiene at workplace, the industry has responded well.

“The Labour Law was amended twice in 2013 and in 2018, and Labor Rules was promulgated in 2015 to ensure workers well-being and safety at workplace. A central fund has been created under the supervision of the government where garment factories are contributing more than $15 million of their export receipts to be used for the workers’ welfare purposes,” he added.