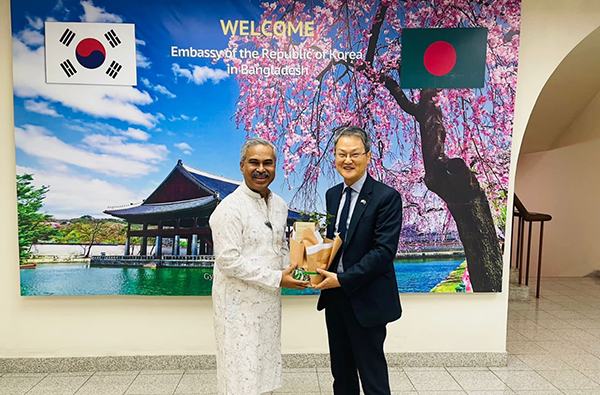 BGMEA President Faruque Hassan has stressed on the need for intensifying cooperation and collaboration to realize trade potential between Bangladesh and South Korea.

Huge opportunities lie ahead for Bangladesh and South Korea that could be seized through deepening cooperation in trade and investment, he said while exchanging views with Ambassador of South Korea to Bangladesh Lee Jang-keun at the Korean embassy in Dhaka on April 17.

Their discussions included possible areas of expanding trade between Bangladesh and South Korea and ways to boost bilateral trade that would benefit both countries.

During their conversation, Faruque Hassan recalled South Korea’s contribution to the Bangladesh’s apparel industry, especially in the early stage of its development.

He expressed thanks to South Korea for allowing Bangladesh’s RMG products duty-free access to the Korean market.

He also hoped the cooperation and collaboration between South Korea and Bangladesh would be strengthened further in the coming days.

Ambassador Lee and President Faruque Hassan agreed on increasing interchanges between the Embassy and BGMEA, in particular in jointly commemorating the 50th anniversary of the establishment of diplomatic ties between the two countries next year.

They also expressed willingness to work together to deepen and strengthen the bilateral business ties based on the successful collaboration in the RMG sector.